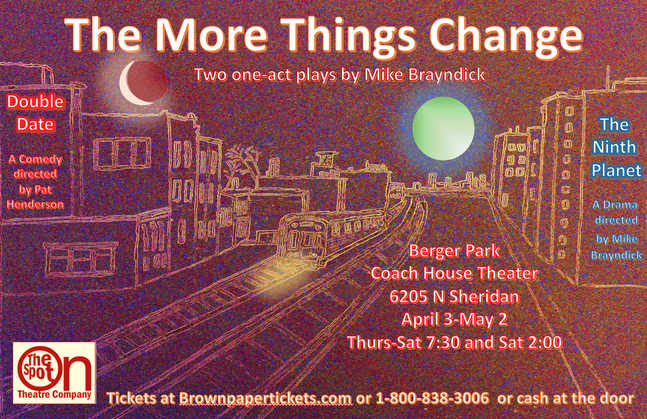 ​In Double Date, when Denise Arnold, a high school science teacher, meets David Joyce, a copywriter for a software company, through the Bumble dating site, she thinks she may have found the man of her dreams.  But to make sure he is not just an illusion, she decides to do a dating experiment of her own devising, much to the chagrin of her long-suffering roommate and former girlfriend, Avery James, a musicologist and bartender.  Avery can’t prevent Denny from nearly splitting herself in two to test whether true love is possible, and complications and comedic soul-searching ensue for everyone before things come back together at last.

In The Ninth Planet, when Chris Markham, historian, and his wife Melly, go on a last-ditch weekend to save their marriage, leaving their adopted home in posh Hampstead, England, they have no idea what awaits them in their former Chicago neighborhood.  Because, sitting in the same café from twelve years ago, are their equally unsuspecting friends Al and Jan Warren.  Jan a progressive school teacher is working on a novel about the things that shape our lives, and Al an English professor is grading papers on Jack Kerouac.  The two couples had bonded twelve years before during Obama’s campaign for president.  Chris, enjoying recently inherited wealth, has undergone a political sea change.  Old values and old friendships are tested when old secrets also are revealed on a late-summer weekend in Lincoln Square.

Double Date and the The Ninth Planet, both set on the North side of contemporary Chicago, explore whether when it comes to love and friendship, the more things change, the more perhaps they stay the same, only in new and rather dynamic ways.  Enjoy this entertaining, fun, and thought-provoking On The Spot double treat of comedy and drama with the same talented cast members in both pieces this spring at the Berger Park Coach House Theatre.